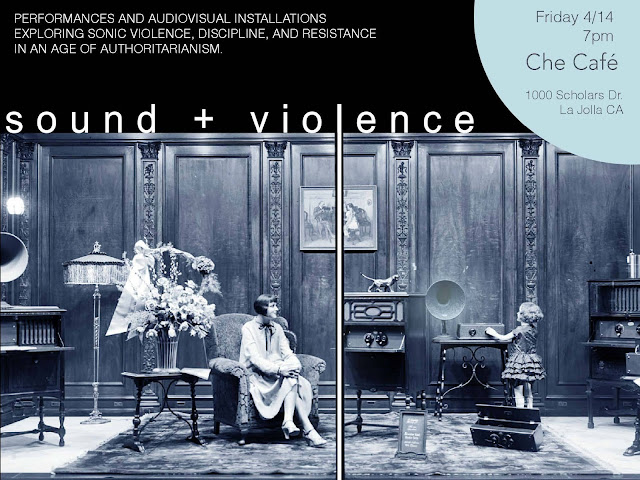 Performances and audiovisual installations exploring sonic violence, discipline, and resistance in an age of authoritarianism.Participants, performers, composers, contributors:Tyler J. BordenIn this piece, a cello is distorted in its material form, and divested of the beauty typically associated with it. All that remains is an uncanny apparition. The interior of the cello, haunted by indiscernible vibrations, shakes as though a poltergeist is trapped. This abject vision is quasi-mystical, perhaps an altar for a post-apocalyptic world.Barbara ByersSacred Abjection: LullabyesPondering sacred abjection, the sublime, drones and apocalypse, this piece explores the juxtaposition of violence and horror with awe and love in lullabies from various cultures and time periods, including personal compositions. Simultaneously and wrapped up in it all, this is a project locating and embodying the perfect scream.

Daniel Fishkin
Trump Songs by Dead Lion
“versions” of Black Flag songs, as sung by the avatars of donald trump and/or henry rollins inhabited by my body.
Apocalypse Music
solar sounders are electronic instruments that work without the power grid, using solar cells and primitive oscillator circuits. in the event of societal collapse, what type of electronic music would we have? here's a hypothesis. i will present some of my own versions of existing solar circuitry and my own modifications to these.

Hillary Jean Young
An exploration of the parallelism of childhood trauma shaping adult memories, and adult experience colouring childhood experience, through the children’s film Babe (1995). Investigating queer concepts of failure, queer time, and the implications of a pig that wishes it was a sheepdog (and a duck that wishes it was a rooster), this performance/installation records and loop moments of trauma in Babe, building a texture of squealing pigs, crying, and insults.

Andrés Gutiérrez Martínez
This piece juxtaposes recorded sounds that, although similar in nature, are created in very different contexts, under very different circumstances. I explore the ambiguity of explosive sounds that testify to conditions of war, but also to the normalization of violence as entertainment/celebration in places where war is not the reality.

John Burnett
Enclosures
Enclosures emplaces means of sonic control within the present space. Though the use of headphones and coordinate tracking, the subject is “free” to explore an environment infested with audio viruses, distorted passages, and monolithic sound beings.

Issac Garcia-Munoz
Fear Unsound
Invoking fear and testing the limits of how long a player can withstand listening to harsh sounds, this “game” requires the subject to localize sound objects in 360° space, in order to silence them and gain points.

Jordan Morton
A performance centering on the mythology surrounding the figure of Lilith, whose story embodies sound/utterance = proclamation of self, and the female body and sexuality as the site of constant war. Lilith IS the state of exception.

Lauren Jones
Dreams are seemingly infinite yet fleetingly anomalous bursts of visions, narratives, memories, and distortions within the realm of sleep. Music, when it occurs in dreams, can be an exceptionally vivid sensation. This piece almalgamates dreamlike forms of environmental sound, spoken language, and music to depict themes of distortion versus clarity, and oblivion versus lucidness.

Sindhu Thirumalaisamy
An electroacoustic piece based on the spoken words of poets and writers from the UCSD Department of Literature, exploring themes of illness, imperceptibility and the magnetism of evidence. How can we undermine institutional correctness in situations where rational logic is no basis for the conditions of labour and production?

Zebulon Zang
Aviation, for both civilian and military use, stains the soundscape of San Diego and the outlying communities. This film essay presents aspects of my research into jet noise (the “sound of freedom”), pilot experiences of speed and height, and my attempts to access a space on board a plane from Marine Corps Air Station Miramar.

Tiange Zhou
Asian women often remain silent about sexual harassment and abuses, because in our cultures, speaking out can bring shame upon ourselves and our families. I want to be the human body that speaks about such experiences. Using musical sound and recorded narratives, I will engage performatively, from the first-person position, with my story and the stories of others.